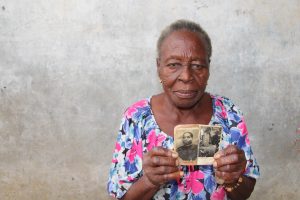 In this photograph, Angelique (82, from Brazzaville) holds a picture of the prophet Matsoua. In colonial and post-colonial times Matsouanists like Angelique and her family have been deported to all corners of French Equatorial Africa in an attempt to repress the emerging religious movement. Throughout these violent and traumatic deportations, Matsouanists have held on to their cultural-religious identity. They form an anti-colonial resistance movement in the face of repressive measures up until today.

In 1942, Angelique and her family were sent to Chad where they lived under house arrest for over ten years. Chad at that time served as an open-air prison: people were sent there by the French and left to their fate. They could not return home. In the photo, Angelique holds a booklet that belonged to her father. It contains a photo of the prophet Matsoua. The Matsouanists from Brazzaville have suffered from violence and repression, but the movement still exists. Angelique has returned to her hometown of Brazzaville.

Project: Connecting in Times of Duress