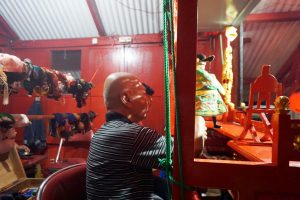 For thousands of years, Chinese communities have not only settled on many parts of the Indonesian islands, but they have also shared and infused their culture and traditions with the local population. One of the most fascinating legacies of Chinese culture is the well-preserved art of puppetry known as Wayang Potehi.

Wayang Potehi is a traditional performance that was brought from southern China by immigrants and which features characters and stories from Chinese legends. The word ‘potehi’ itself is derived from the word ‘pou’ meaning fabric, ‘te’ meaning sackcloth, and ‘hi’ meaning puppet. Literary translated, ‘potehi’ means puppets made from sackcloth. The puppets are controlled by using all five fingers: the three middle fingers of the puppeteer manipulate the head, while the thumbs and little finger control both hands of the puppets.

Wayang Potehi came to the Indonesian Archipelago between the 16th and the 19th century, along with the arrival of Chinese traders and migrants. For the Chinese descendants living in Indonesia, Wayang Potehi not only serves as entertainment but it also has a social and ritual function. It is usually performed in temples, especially along the northern coast of Java, including the city of Semarang.

When it was first introduced in Indonesia, Wayang Potehi used the Chinese language with Hokian dialect. Over time, the art came to be performed using the national language of Bahasa Indonesia so that a non-Chinese audience could also enjoy the show.