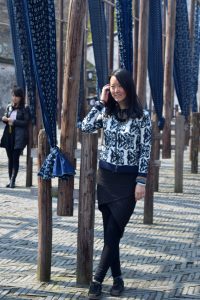 Tie-dyed (zha ran) fabric in Wuzhen, China. The ancient blue and white style remains in fashion, but is used in a more modern way. The fabric, already popular during the Dong Jin Dynasty (317-420 A.D.) was mainly used for clothing. The technique was further developed during the Tang Dynasty (618-907). During the North Song Dynasty (960-1127), production of this type of fabric was forbidden as it was believed to cost too much labour. However, the traditional technique has been maintained and is still in use today.