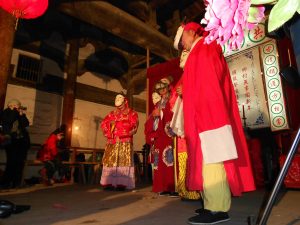 A scene from a traditional Nuo Opera performed in Anhui Province, China. It has its origin in ancient sacrificial rituals with a strong agricultural motivation. The opera is a religious performance intrinsic to the culture of Nuoism, a type of Chinese folk religion. It combines different elements not only from Daoism and Buddhism, but also from well-known historical events and folk tales.

The purpose of Nuo opera is to drive away devils, disease and evil influences, and also to petition for blessings from the gods. Singing and dancing are included in Nuo opera and performers, usually native peasants from the same village, wear ferocious masks and unique costumes while speaking an encrypted language. The unique symbol of Nuo opera, the masks, are considered a treasure of Chinese folk art.

Nuo opera is now a listed national intangible cultural heritage in China. Nuo has also spread outside the boundaries of China. The form of opera was transmitted into Japan and inspired the creation of the Japanese Opera Nuo.