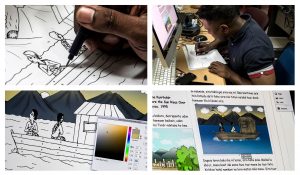 The small half-island nation of Timor-Leste (East Timor) in Southeast Asia gained its independence in 2002. Before Timor-Leste’s independence, education was characterised by the imposition of a formal schooling system that prioritised ‘colonial epistemologies’. Portuguese schooling (1500s-1975), run by the Catholic Church, was for a selective, urban elite and focused on instructing future colony leaders with Catholic values and using the Portuguese language. Schooling during the Indonesian occupation (1975-1999) expanded access to education in order to spread a pan-Indonesian nationalism, ‘pancasila’, and quell the Timorese guerrilla resistance. Once Timor-Leste gained its independence, initial efforts focused on rebuilding school infrastructure, training local teachers, and getting kids back to school. However, imported copy-paste versions of foreign curricula continued to be taught in schools.

More than a decade after independence, Timor-Leste’s Ministry of Education started creating its own primary-school curriculum for the first time through the 2013 Curriculum Reform. The reform team has created local curricula, lesson plans for teachers, and a wide array of localised learning materials, including posters, storybooks, music recordings, and even a literacy TV show broadcast on the national television channel. Book illustrations like this one about the creation myth of Tasi Feto, Tasi Mane (‘Woman Sea, Man Sea’) are designed to transmit national pride and indigenous knowledge through modern means, and are an example of how Timor-Leste is blending local content with Western educational models.