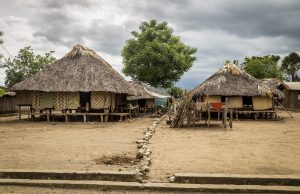 The isolated, rural district of Cova Lima, on the south coast of Timor-Leste, has been in turmoil since the government planned the development of an oil and gas industry in the region, which includes a new city, a port, a supply base, a highway, and the conversion of the existing small landing strip into an international airport. The construction of the new airport requires that the residents of Holbelis, one of the few ethnically Bunak villages in the area, are moved to another area.

However, the villagers have refused to move to the alternative sites proposed by the government. The merging of the Bunak villagers of Holbelis with different ethnic groups would cause conflict. Other proposed sites are far away from the main roads and markets, lack access to water, or are prone to flooding during the rainy season. The inhabitants of Holbelis also fear that moving the village close to the new development will corrupt their way of life, by exposing their youth to the foreign influences that transit through the new airport.

For now, the Holbelis village remains in the same place, but a possible move threatens its heritage, including its architecture, as seen here. What will happen next?