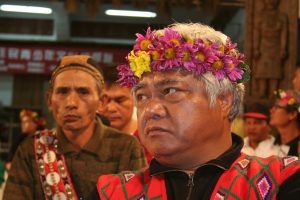 This image was taken during a lively protest meeting of the Puyuma in January 2006 against further loss of their traditional territory in the south-eastern corner of Taiwan, near the city of Taitung. For the meeting a few members of the national parliament had been invited, including also an indigenous representative. All the people in the audience were wearing their colourful ethnic outfit, including head dress with flowers, feathers and wild boar teeth. Importantly, the meeting was also recorded live by the Public Television Service of Taiwan. Before the heated discussion started, Puyuma youngsters performed a warrior dance. The meeting took place shortly after.

The Indigenous Peoples Basic Law of Taiwan (2005) had been adopted by the national parliament. Through this law the Puyuma, like many other indigenous groups in Taiwan, hoped to regain their traditional territories which they had lost in the course of the colonial or more recent Taiwanese history. They also hope that there will be more room for expressions of indigenous identity.