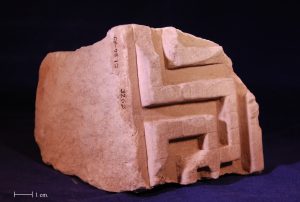 The meander became a global traveller from an early moment onward – already in the mid-Hellenistic period (around 150 BCE) the motif travelled as far east as northern India, where it remained a common motif for many centuries.

In Roman material culture, the meander appeared in mosaics from Britain to Northern Africa. Through its ubiquity, meanders have permeated our modern cultural memory. This is the reason that the practice of adorning buildings with this successful motif is still very much alive. Interestingly, the site of Samosata, where this particular object was found, is not yet considered global or national heritage as it was almost completely forgotten after it was excavated.
The Leiden research group ‘Innovating Objects. The Impact of Global Connections and the Formation of the Roman Empire (200-30 BCE)’ has the unique opportunity to publish many of the finds – such as this meander architectural frieze – related to the excavations from the 1980’s, combined with a re-analysis of much of the unpublished excavation reports. In this way, the heritage of the local communities becomes visible and tangible again.