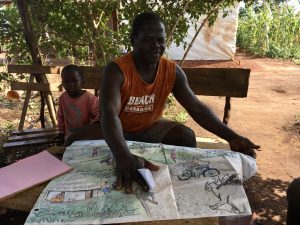 The man pictured is Mr. Waraga and he is one of the more than 1,000,000 South Sudanese refugees in Uganda. In South Sudan, Mr. Waraga was a senior inspector for culture in the government, and he is very interested in the cultural heritage of his ethnic group, the Azande.

A lot of cultural heritage in the form of books and art were destroyed or displaced by war. Moreover, many of the South Sudanese refugees have been refugees for much or even most of their lives. They often say ‘I was born in war, I have lived in war, and I will die in war.’ Often, displacement brings with it the fear that people – especially the younger generation – get ‘lost’ and alienated from their cultures. So after independence in 2011, there was a tremendous push both at the national and ‘ethnic’ level to rediscover/reinvent cultural heritage as a way to strengthen cultural identities and social cohesion.

Mr. Waraga also tries to keep the cultural heritage alive, while staying in Kiryandongo Refugee Settlement, by making paintings and drawings, and telling the youth about Azande traditions and history.