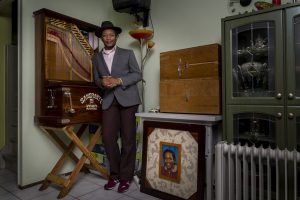 Kaha di Òrgel: a Fusion of Worlds
The Netherlands

The Kaha di òrgel is a musical instrument that forms an important aspect of Aruba, Bonaire and Curaçao culture. Combining a cylinder piano with an organ, it consists of a mahogany organ case, a rotating cylinder containing up to eight songs and a crank producing tones as it is being turned. An ensemble of Kaha di òrgel players usually also contains a musician playing the wiri: a metal tube ending in an upward curl, which produces a rhythmic tingling sound when played with a metal rod.

In 2015 and 2016 the SPLIKA foundation was committed to maintain cultural elements from Aruba, Bonaire and Curaçao, and in 2016 SPLIKA enabled the addition of kaha di òrgel to the national list of Intangible Cultural Heritage

The organ was developed in the Antilles during the 19th and 20th centuries, based on European instruments. Later, migrants introduced it to the Netherlands. With the effort of SPLIKA – In 2016, it was added to the list of Intangible Cultural Heritage of the Kingdom of the Netherlands. It is an example of the impact of centuries of human migrations, creolisation and ongoing connectivity across the Atlantic (Europe, the Caribbean and Africa).