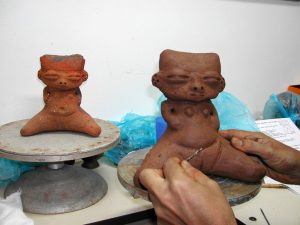 More than 400 pottery figurines were recovered by archaeologists during systematic excavations on tiny coral islands of the Los Roques Archipelago, an atoll-shaped coral formation, located off the coast of Venezuela. Between A.D. 1200 and the European Conquest time these islands were seasonally visited by the Amerindian peoples who lived permanently on the north-central Venezuelan mainland.

Those intrepid indigenous navigators were crossing the distance of 135 km in dugout canoes, bringing with them dozens of figurines and other pottery, stone and bone artefacts. The reason of this risky and long lasting mobility – back and forth between the continent and the oceanic islands – was the intensive exploitation of marine resources, mainly the queen conch (Lobatus gigas), marine turtles and salt.

Tying up the ‘ideological’ strings identified in the archaeological record of the Los Roques Archipelago, the interdisciplinary research demonstrated that the figurines were closely related to the animated agency of the Lobatus gigas mollusc. The human-mollusc interaction on economic grounds was inextricably intertwined with the ‘spiritual’ life of the Amerindians. The resulting ceremonialism protected the indigenous visitors from the anger of the queen conchs’ caring spirits. Pottery figurines assumed metaphorically the roles of women (as the category of social actors who were largely absent in the insular campsites) and were used in shamanic activity and rituals oriented at placating the anger of the spirits ‘protectors’ of the queen conch and other marine animals. They were manipulated by shamans together with other artefacts of clear ritualistic function, such as pipes, ocarinas, pottery rattles and burners, bone flutes, mineral ochre and oleoresins.

Today, a skilful artisan makes replicas of some of these figurines, using raw materials and methods similar to those that were used by the Amerindian potters some 1000 years ago. The hands of the artisan interweave the past into the present. Visitors from all over the world learn about the fascinating travels to the Los Roques islands and returning back home bring with them the replicas of the figurines wrapped in rich memories about the vibrant and colourful Amerindian past.